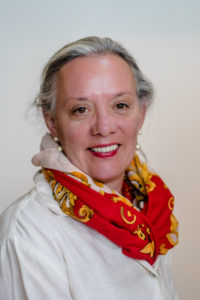 I  was born in Mexico City, Mexico, raised in Stamford, Connecticut, and attended Marietta College in Marietta, Ohio graduating with a B.A in Art History.  With a love of art and artists I landed my first job out of college at Christie’s Art Auction House in New York City working initially as a Scribe (manual inventory records) and then working as the Auctioneer’s assistant.

In 1983 a college friend, Bob, was visiting NYC and called to reconnect.  We did.  In 1984 Bob and I were married and moved to South Bend, where Bob began his career as a Stock Broker.  Today he owns his own firm Robert B. Miller Financial.  Initially I took a job at Edgerton’s Travel with the idea we could leave South Bend often and travel.  Well….I traveled solo as Bob was hitting the pavement forming his business.

In our 33 years together, we have raised 3 children who are all grown or almost grown; Laura 29 living in Atlanta, Brad (26) working as a Brewer in Denver, and Keith who recently completed college at Bradly University, looking to move to Chicago to become a stand up comedian. As our children naturally became independent, in 2012, after 4 years of helping Helen, an elder friend, manage breast cancer and a brain tumor, I became acutely aware of senior care. Senior care and quality of life have become the focus of my life and the creation of Turning Point Senior Care Solutions, a service which lifts the “fog” of senior services, programs, and living choices in the Greater South Bend area.

Emee is available for free 30 minute consultation to help you understand which of our three services is best for you.